The description of Map One Block App

One Block Minecraft is a mod in Minecraft that starts the player with a single block floating in the sky. you have to cut each block and build a wide footingEvery time the player digs a block there will be a new material will appear in its place. The first are earth and wood rarest blocks, and as the game progresses the blocks produce rarer and better materials. One Minecraft Block has 10 phases. depending on where you want to minePlains are the first phase, often resulting in minecraft survival dirt, wood, sheep, cows, chickens, villagers, and mobs and other materials.After 700 blocks, the player moves to the second phase. Dungeon consists of a one block raft survival map of cobbles, coal, iron ore, basic evil mobs like zombies, skeletons, spidersThe third, fourth, fifth, and sixth phases are phases in which one block survival island is dedicated to exploring various biomes. These biomes include Winter, Ocean, Jungle Dungeon, and Desert phases.Both biome-related and regular blocks can be generated during this phase. Some of the famous one block survival map blocks and mobs from these four phases are ocelot, polar bear, panda, melon, and various wood variations.Phase seven is the Nether. As the name suggests, netherracks, netherquartz, soul sand, nether bricks, glowstones, and magma blocks can be found here. The Nether Phase is also home to Nether monsters such as Withers, Blaze, Ghasts, and Pigment Zombies.Phases eight and nine are just as similar as the reverse. There are Idyll and Desolation phases. In this phase, the game prepares the player for the final phase by giving them rare and ordinary items.The final phase is the End, where the block survival player fights the Ender Dragon and wins the game.here you can use the mod for free and without one block survival map skyblock limitations and remember to install only one click it automatically enters, so what are you waiting for download now and share with your friendsDISCLAIMER: This is an unofficial application for Minecraft Pocket Edition. This application is in no way associated with Mojang AB. The Minecraft Name, the Minecraft Brand and the Minecraft Assets are all property of Mojang AB or their owners. All rights reserved. In accordance with http://account.mojang.com/documents/brand_guidelines 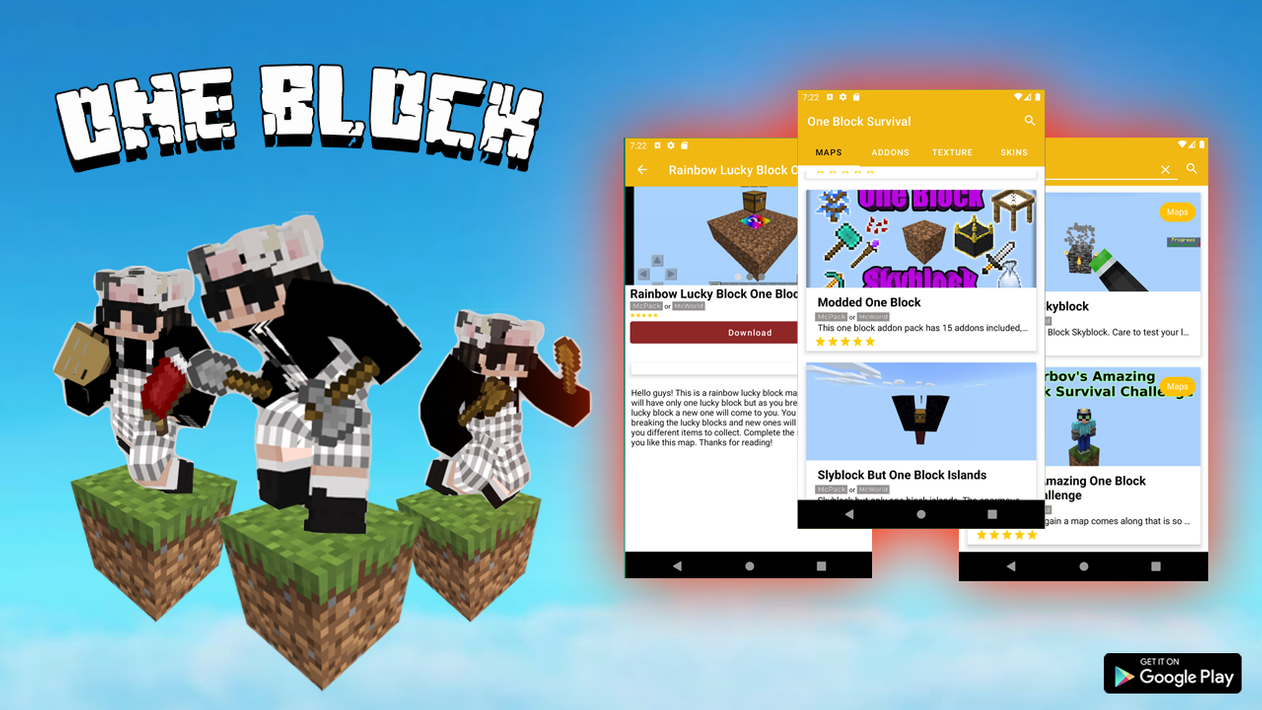